I recently had to set up H2O’s Wave Server on AWS Lightsail and build a simple Wave App as a Proof of Concept.

If you’ve never heard of H2O Wave then you have been missing out on a new cool app development framework. We use it at H2O to build AI-based apps and you can too, or use it for all other kinds of interactive applications. It’s like Django or Streamlit, but better and faster to build and deploy.

The first step is to go to AWS Lightsail and select the OS-based blueprint. I selected my favorite distro of Linux: Ubuntu 20.

Then I attached an instance size, I opted for the $5 a month plan. The instance is considered tiny, it has 1GB memory, 1vcpu, with 40 GB storage.

Also, make sure that you’re in the right AWS region for your needs.

NOTE: YOU WILL NEED TO OPEN PORT 10101! Just navigate to Manage > Networking on your instance and add a custom TCP port to 10101, like so:

Ubuntu 20 comes preloaded with a lot of stuff, like Python 3, but you’ll need to update & upgrade the instance first before installing the required libraries.

On AWS Lightsail you can click on the ‘Connect with SSH’ button on your instance card. That will open up a nice terminal where you can run the following commands.

Then install pip, virtualenv by doing:

Once you’ve done that, your instance should be ready to download the latest Wave Server release!

Grab the latest version of Wave (as of this post, it’s v0.13). Make sure you grab the right install package. Since we are on Linux, download the wave-0.13.0-linux-amd64.tar.gz package.

I did a simple wget to the /home/ubuntu directory like so:

Then I unzipped it using the following command:

Once I did that I had a directory in my /home/ubuntu directory called wave-0.13.0-linux-amd64.

CD into the wave-0.13.0-linux-amd64 directory after you unzipped the package. Once you’re in there you just need to run the following command to start the Wave Server

The Wave Server should spin up and you should see similar output below.

The neat thing about Wave is building all the apps. To do so and for best practices, we create an apps directory. This is where you’ll store all your apps and create a virtualenv to run them in.

Once you’re in the /home/ubuntu/apps directory you’re going to set up a virtual environment and write your app!

Next, initialize the virtual environment by running:

The next step is to create a src directory where you will store the source (src) code of your app. This base app directory is a great place to put all sorts of things for your app, like images and requirements.txt.

Once your apps directory and virtual environment are set up, it’s time to run your Wave App.

It’s a simple command as

If it spins up without any errors, navigate to your instance’s IP address:10101 and see your app!

(Note: check out this tutorial for the Stock Chart Generator Wave app shown below)

Automating a Wave Server and APP

There are two things that happen when you run a Wave Server and Wave App, you have to make sure the Wave Server is running and that the Wave App is inside a virtual environment that’s active.

That’s a lot of moving parts but it can be automated with a nice script that you can install upon your instances boot up.

Here’s a simple bash script that I wrote to run the Wave Server in the background and make sure my stock app is running inside the virtual environment and is reachable.

Make sure to chmod x mystartupscript.sh and save it.

Note the --no-reload part. When Wave is in dev mode it scans the directories of where your apps are for any code changes. In production, you want to disable that because it can use up CPU power! 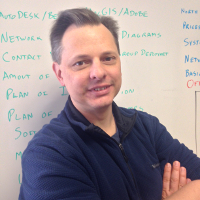 Tom is a Senior Customer Solutions Engineer for H2O.ai. He started his career in Engineering working for large transportation firms around the USA before transitioning to the startup world in 2014. He comes to H2O.ai from his own Data Science consultancy and RapidMiner. A gritty and seasoned Sales Engineer, he worked across Product Marketing and Community Development and learned how to solve complex customer problems. He's a natural born tinkerer that loves figuring things out and getting it done.